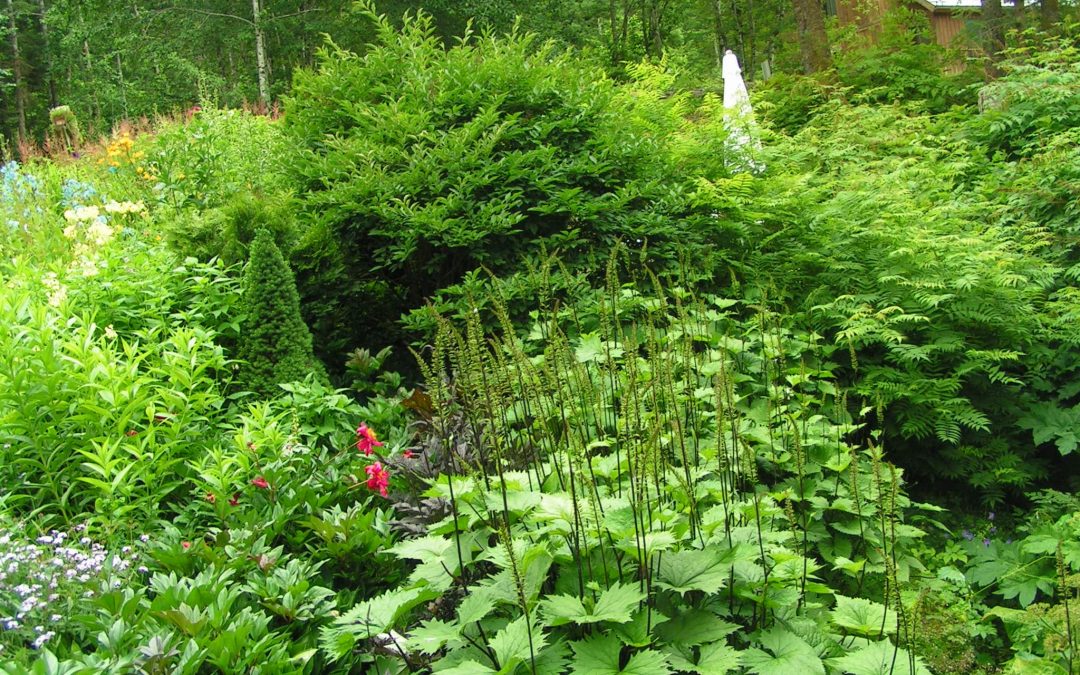 There are many reasons for including native plants in our domestic spaces, they’re adapted to the climate and soils, they’re food and fuel for the native fauna, they’re in keeping with many of the codes of right plant for the right place, but above all, they are beautiful in their own right and deserving of a high position in any index of landscape plants.

Who cannot be thrilled by the winter silhouette of the glistening scarlet branches of the Alaskan Blueberry, or fail to react to the immense leaves of the Giant Skunk Cabbage? The delicate beauty of the Chocolate Lily when she flowers above a bed of three lobed Nagoon berries is a vignette of heart stopping quality, and our alpine meadows with water lilies among creeping dogwoods and dwarf Lignonberry are essays in the rightness of natural settings.

We revel in the sweeps of wetland grasses, turning from dark green to russet and gold, and share in the awe as the whole world seems to burst into fuchsia when the Fireweed breaks open. The soft haze of emerging Alder catkins or the energetic eruption of Spruce pollen reminds us of our minuscule place in this huge landscape, where natural processes proceed at their own ponderous pace and tiny human habitations cling to the shores of these oceans of forest.

The native plants of this environment create scenes of rare beauty, and seen as isolated jewels or as horizon to horizon masses, they satisfy the desire for symmetry and delight. As landscape elements they can be foreground features, mid-ground experiences, or background environment, they can be used as stand-alone locales, or mixed with plants chosen from other parts of the world.

Those lucky enough to have homes set into the natural world can with minimum disturbance satisfy their landscape desires with the simplest of tools; a pair of shears, a saw, and a shovel. These and a sense of design can create the archetypical Garden of Eden in any cove or meadow, filtering some of the more overwhelming elements and highlighting gems that would otherwise be submerged by their neighbors. A couple of hours with a pair of sharp pruning loppers can transform a gloomy Alder thicket into a light flooded bower with chosen views enhanced or enlarged. The process of cleaning up the dead, and removing the weak or crossing branches quickly moves to one of enhancement and selection, and very quickly a side yard long ignored can become a featured locale.

Remember, all the plants we use in our gardens, all the thousands of nursery grown specimens and hybrids were once plants in the wild. They or their ancestors, were native somewhere. The same pruning and cultivation techniques we utilize for the nursery grown plants are appropriate and useful for the intact native plant communities in which we find ourselves. Removing the overgrown or decaying parts of a tree or opening the canopy to allow more light to the forest floor will do wonders for a long ignored area.

When the light comes through the canopy, the lower layers of foliage are released from the bondage imposed by shady leaves. Ferns, Violets, Dogwoods and Mosses emerge within a season, and three years will see the floor covered in vibrant green. Ten years gives an understory of Blueberries, Huckleberries, Menzetia and Devils club. Walk through the trails along Sandy Beach, among the remnants of Treadwell and the Mexican mine, it’s only been five years since the forest was thinned and the trails cleared, but look at the resurgent vegetation. What had been a closed and shady forest floor is now filled with abundant understory plants.

People who want to hurry this process along can look to the guidelines of my Masters thesis for Landscape Architecture The Salvage and Reuse of the Understory in the Native Forest of Juneau Alaska (University of Oregon Press, 1995). It shows how to cut up the groundcover layer from areas slated for development and move them as intact sod pieces to new locations. They are set into a bed of native peat, and take off growing as if they had never been disturbed. Many parts grow more quickly, since they have been given a brighter setting.

This process, the transplanting of the native vegetation as intact pieces rather than as individual plants avoids the problems of weedy competition, since the entire surface is covered and there is no place for the weeds to grow. It may also contain some surprises, as the dormant plants in the transplanted mats can burst into growth in the new location in response to the changed environment. Look at the plantings at the new Juneau Police Station, five years after moving transplant mats into place, new populations of plants have emerged from the old muskeg. Shooting Stars and Columbines, Native Iris and Potentila have colonized the edges of the sphagnum masses, they were suppressed populations in the older wetter location, but the move to this reclaimed gravel pit has allowed them to multiply. The older populations of stunted conifers and Labrador Tea have likewise exploded.

Smaller spaces too can benefit from this treatment, a small side yard on Calhoun Street was a difficult place for anything to grow, packed earth of dubious fertility and overshaded by adjacent apartments. It looked hopeless, but moving native sod pieces gave instant results, these ancient and adapted plants settled right in, and two seasons later look as if they had never been anywhere else. They were moved as pieces two by four feet, and set on a six inch layer of peat, and watered well for the first season. Their natural seasonal growth, flowering and even fruiting is back, and they provide a carefree landscape of unparalleled beauty.

Native plants in containers show off the individual characteristics of the specimens in ways mass plantings can never do, sections pulled from a road edge can become treasures when set into a shallow tray and given a season of grooming. Willows, tiny conifers, or mossy mounds can all be easily collected; any meadow or open space becomes a mother lode, and federal regulations allow collection from National Forest lands with an easily obtained permit. The problems of maintaining decorative plants in containers in our area, the difficulties of keeping the dormant during the February thaws, and dealing with the early onset of winters, is eased when the plants are locally adapted species.

Native plants can be used as individual specimens, allowed to remain as intact landscapes, or manipulated into familiar shapes and forms, like the beautiful Sitka Spruce hedges along the Back Loop. Their qualities are easily combined with the most exotic of hardy imported species, or appreciated on their own.  There are as many good ways to landscape as there are people to do it, and our hardy, beautiful neighbors are excellent choices for any planting; domestic, commercial, or public space.

Native plants can be used in familiar ways too, we can create gardens and landscapes that echo the landscapes of more developed areas of our nation. Copses of Alder or groves of native Crabapple can be combined with shrub masses of Blueberries and Salmonberries, (they respond to the pruning shears just like Holly or Laurel). Groundcover layers of Labrador Tea or Dwarf Canadian Dogwood and Western Sword Fern  make the same impact as ones of Juniper or Ivy, and flowerbeds of Columbine, Forget-me not, Dwarf Fireweed, and Alpine Cinquefoil are interchangeable with similar ones in other climates. The main difference is that these native plants are easier to care for.

Whether the gardener wishes to appear to have settled into the surrounding landscape, or to have recreated the feeling of another place using the indigenous plants of the region, these natives are among the toughest and easiest to grow species anywhere.  Open meadows, shrubby transitional zones, or upland forest and glade, all are sources for inspiration, for design, and for the plants themselves.